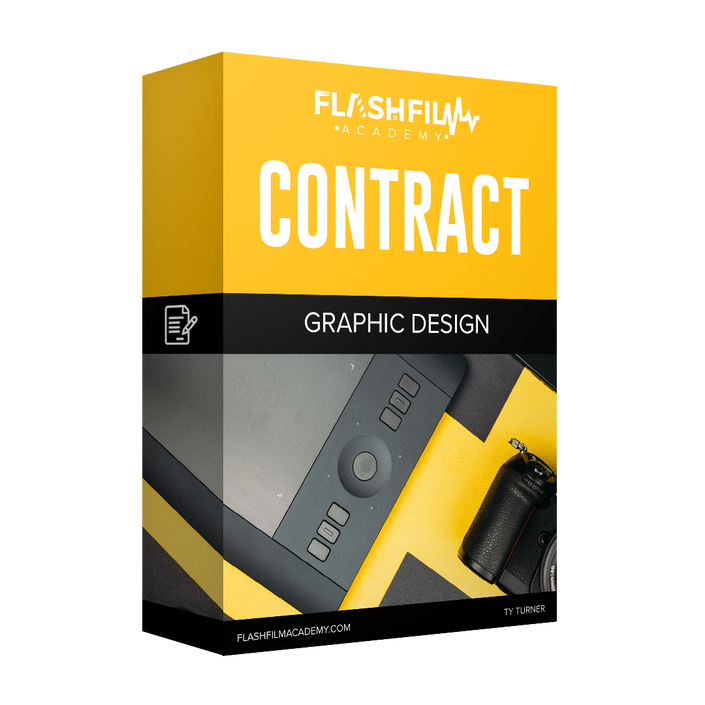 With this Contract YOU WILL have the ability to protect yourself and brand from the nagging issues most Graphic Designers in the industry face with their clients.

Specific clauses designed for this industry:

Clients is responsible revisions based on set schedule.

Disclaimer: The following contract has been reviewed by a lawyer. HOWEVER, laws are different in each county, city, state, and country. There are intended to be a guideline rather than a comprehensive, complete contract. FlashFilm Academy is not responsible for any lawsuits, damages, or disputes that may arise from using this contract template. PLEASE see a local Lawyer to make any tweaks or changes needed for your region.

Ty Turner, the founder of FlashFilm Academy and US Army veteran, has experience as a combat photographer and videographer. Creating content under the harshest conditions at the highest level of the government. After his military career, he transitioning to corporate America holding positions with companies like TGI Fridays, Texas Instruments, and DELL. Where he was not only tasked to create content but was brought in to be the architect behind their internal multimedia departments designed to support marketing, social media, and learning and development content. He later went on to launch his own production company FlashFilm Media, that quickly became one of the most trusted production companies in the region. Working with companies like Raising Canes, Verizon, Toyota, PGA, KIA, Dr. Pepper, Walmart, Google, Samsung, and more! On the path to growing his company, he notices that there was no blueprint or resources to building a content creations company. So he founded FlashFilm Academy, an online training platform designed to help other content creators grow their business.

Contract
Available in days
days after you enroll

When does the course start and finish?
The course starts now and never ends! It is a completely self-paced online course - you decide when you start and when you finish.
How long do I have access to the course?
How does lifetime access sound? After enrolling, you have unlimited access to this course for as long as you like - across any and all devices you own.
What if I am unhappy with the course?
We would never want you to be unhappy! If you are unsatisfied with your purchase, contact us in the first 30 days and we will give you a full refund.
off original price!